A Resounding Success on Many Levels 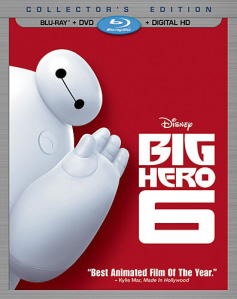 The trouble with reviewing a film as hyped and popular as Big Hero 6 is that there isn’t much about the piece that hasn’t been already said. I suppose the place for me to start would be to confess that I’ve been a little leery of the Disney acquisition machine. If there’s one thing the business world teaches us it’s that monopolies are dangerous. Disney has been on a tear in the entertainment industry of late, scooping up entire powerhouse studios like Marvel and LucasFilms. And while it’s true that they have pockets deep enough to do the properties they are inheriting justice, some of their sensibilities and practices are worthy of skepticism to be sure.

That said Big Hero 6 alleviates any such concerns quite convincingly and in fact can be viewed as one of the finer outings of either of the two companies of late.

Based on a lesser-known Marvel Comics title with strong anime ties and set in the fictional but scarily detailed city of San Fransokyo, we follow the exploits of young robotics wizard Hiro Hamada (Ryan Potter) and his big brother Tadashi (Daniel Henney). After a series of events, Hiro ends up inheriting is older brother’s masterwork; an innocent inflatable vinyl nurse robot named Baymax (Scott Adsit) as well as his brother’s student colleagues from a prestigious robotics institute.

From there the plot takes a decidedly simplistic narrative turn in the great tradition of Scooby-Doo whereby a masked villain appears with evil intent that only the likes of a group of teenagers and their dog, er I mean vinyl nurse robot can foil. However, while this would ordinarily sound like a slam, the fact of the matter is rich character development, beautifully placed (and timed humor) and one of the richest environments in the CG medium to date can make the fairly straight-forward plot motivations forgivable.

Even still there are a few pretty nice twists to keep viewers guessing and while the actual hero group itself doesn’t quite evolve past the introductory phase, the core of this one hinges on the sincere relationship between Hiro and Baymax. And what a relationship it is. On the surface it is one of learning, growing together and the alternating roles of caretaker and receiver but dig a little deeper and there are themes of robotic ethics, the dangers of artificial intelligence and love that can transcend the definition of what we can consider an inanimate object.

Comparisons abound between this one and Pixar’s much ballyhooed The Incredibles but I tend to fall into the line of reasoning that these are two very different approaches to CG animated super-heroism film (much in the same way you could throw DreamWorks’ Megamind or Universal’s Despicable Me into the class). This is a geek-laden robotics film with a slant toward the value of friendship first and foremost where the group superhero dynamic slowly manifests by the end. The Incredibles, to my way of reasoning, was more like a superhero commentary film from start to finish. It took a lot of the cliches and tropes of the genre and used them to create humor against the family dynamic.

At the end of the day though all that really matters is that it’s very difficult, if not impossible, to come away from the 108-minute visual feast that is Big Hero 6 without some manner of appreciation for the genre as a whole. When viewed on its technical merit alone, the piece absolutely dazzles from the opening frame to the last shot (which takes place after the closing credits by the way). Just a decade ago Pixar went on record as stating they shied away from trying to animate humans because there was far too much that could take away from the believability. Yet here we have a piece that absolutely banks on the believability of its human characters’ expressions, mannerisms and interactions. Not only that but it succeeds on a level so subliminally as to earn what is perhaps the greatest accolade to a good animated film in my opinion: at times it’s easy to forget that what you are watching is in fact an animated film.

I suppose my biggest complaint about the piece (and it’s pretty minor in the grand scheme of things) would have to be that the marketing potential for this thing is off the charts and it’s pretty difficult to not envision a world packed with BH6 action figures, backpacks, lunch boxes, bed sheets etc. Not to mention the underlying sensation that this film must surely be positioned to serve as the introduction to a franchise/ series. Aside from these minor distractions, Big Hero 6 is a wonderful experience for viewers of all ages and proof that, unlike in the world of business, a Disney monopoly may not be such a bad thing after all.