Not as Bad as Expected but Could Have Been Better 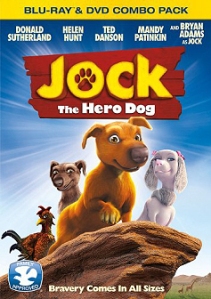 At the end of 2007 Duncan MacNeillie, together with a small team of animators, relocated from Nelspruit to Johannesburg to start production on what would become Jock the Hero Dog. It took a team of 25 animators 3-years to complete the film. Midway through 2009 the decision was made to complete the film in Stereoscopic so as to capitalize on the popularity of 3D computer generated feature films. The end result was released (domestically) on July 24th, 2012 and arrived to DVD on September 25th of that same year.

First thing you are going to notice about Jock the Hero Dog is that there is no shortage of critics willing to tear the film apart on just about every conceivable level. To be honest, coming from a world where Disney, Pixar and DreamWorks have spoiled us with literally all a computer animated feature film could & should be; the animation quality of Jock is going to come up short. Considering 2012 wasn’t all that long ago, one sort of expects a higher degree of visual presentation. However, I am a big advocate of the theory that pretty graphics do not a good movie make so that being said does Jock overcome its visual limitations to deliver a solid story? Well, yes and no. On the one hand it’s a sweeping tale painted against a South African landscape at the turn of the century. It’s based on actual events and encompasses the idea of the bond between man and dog. On the other it’s a bit unfocused on its intended audience. It lacks almost any and all humor and a few of the themes presented are rather melancholy by nature.

First, let’s talk about the good. The vocal cast is quite stellar including the efforts of Helen Hunt, Ted Danson, William Baldwin, Mandy Patinkin, Donald Sutherland and singer/ songwriter Bryan Adams as the titular character. Acting quality far surpasses the animation despite the fact that Donald Sutherland narrates the piece as Sir Percy Fitzpatrick though Theo Landey plays “Fitz” throughout. Granted, perhaps they were hoping to convey the notion that he was much older when recollecting on the past events of his life, the mismatch in voice isn’t subtle and would likely confuse youngsters trying to get a lock on who is actually telling the tale.

Additionally impressive is the fact that the film is loosely based on the 1907 book Jock of the Bushveld; the true story by South African author Percy FitzPatrick that told of his travels with his dog, Jock, a Staffordshire Bull Terrier, during the 1880s, when he worked as a store-man, prospector’s assistant, journalist and ox-wagon transport-rider in the Bushveld region of the Transvaal (then the South African Republic). As such, some historical events and period-accurate details make up the framework of the film. A glimpse of historical fact is always welcome in a film designed to cater to audiences of all ages. 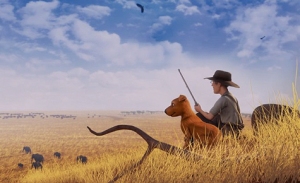 As the film was originally created to accommodate an English-speaking cast, mouth flap timing and natural dialog integration is top notch. This may sound like minor praise but until you struggle through a foreign CG animated film dubbed into English and come to realize this practice brings a whole plethora of issues into the formula.

Now the bad. It appears when developing the film, its creators lost sight of the intended audience on multiple occasions. Factual events are blended with child-appealing elements such as talking animals and evil primates don’t mesh quite as well as they should. Additionally there are many unnecessary supporting characters scattered throughout the film that do little to nothing to advance the prose. Presumably integrated for kid-appeal, the end result only makes it harder to suspend disbelief in the tale.

In all, once you get past the clunky, floaty animation, there are some redeeming qualities to Jock the Hero Dog. This one is probably best viewed as rental material.