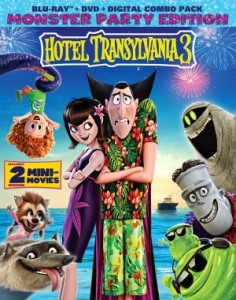 When it comes to animated sequels, usually Disney and DreamWorks remind us that franchises sometimes need to be given entry after entry in effort to squeeze every available cent out of the movie-going public. Sony gets my vote for 3rd place on this trend. They aren’t quite as vocal as the other two about it but if you look carefully at their properties, the more profitable ones tend to sneak out multiple entries.

That brings us to Hotel Transylvania – the 2012 surprise hit that managed to earn $358-million on a budget of $85-mill, spawned an even more successful 2015 sequel ($474-mil against an $80-million budget), a 2D animated series and now a 2018 third feature film that managed to make even more! The budget here was again $80-million but the film returned $528-million worldwide. In case math isn’t your strong suit allow us to put it another way: This franchise is not going to stop any time soon.

Once again the cast is simply star studded, featuring the returning voices of Adam Sandler, Andy Samberg, Selena Gomez, Kevin James, Fran Drescher, Steve Buscemi, Molly Shannon, David Spade, Keegan-Michael Key, Asher Blinkoff, Chris Parnell and Mel Brooks but they’ve managed to add even more talent in the form of Jim Gaffigan, Kathryn Hahn, Chrissy Teigen and Joe Jonas to the roster. Given the nature of making an animated film (essentially doing an audio-play that is then animated around after), it makes sense for director and co-writer Genndy Tartakovsky to stick with what’s worked with him from the first film onward. No sense in fixing what isn’t broken and the third entry to the HT universe is proof of the process becoming a well-oiled machine.

The story this time finds Drac is depressed and lonely after the departure of his wife Martha that leads him into the truly scary world of online dating. Misinterpreting her father’s reaction to being caught “swiping left” as stress from overwork, Mavis decides to book a cruise so that the monsters can spend a little quality time bonding somewhere away from the hotel. From there it’s a hilarious direct flight upon “Gremlin Airlines” to the Bermuda Triangle where the cast of misfits boards the cruise ship Legacy. A reluctant-to-be-away Drac is expectedly frumpy until he happens upon the Legacy’s human captain, Ericka, and immediately falls for her, something that he thought was impossible as he “zinged”, the monster equivalent of one true love, with Martha.

Critically the third film seems to have earned the most mixed reviews to date despite it being the most successful entry of the series. I, for one, appreciate what Tartakovsky accomplished in taking the cast away from the macabre setting of Transylvania and depositing them in an environment about as far removed (a tropical cruise) as possible. This tactic often proves disastrous; dependent upon gimmicks and gags rather than character-driven dynamic humor but again, sticking with the same director and comedic powerhouse cast was a very wise decision on Sony’s behalf.

Of course the downside to sticking with the proven formula is that if you weren’t a fan of what the series has accomplished so far, it’s unlikely this one’s going to change your mind. Perhaps, save for a surprise ending, the plot itself is the thinnest of the trio and relies heaviest upon the characters to do the heavy lifting. Prepare for spoofs of a Vegas show, a heated monster pool volley ball match, a taste of the Drac/ Van Helsing feud (with some comical steam-punk action for good measure) and even a trip to the lost city of Atlantis before all is said and done. Strangely, though a lot happens when writing it out like this, it never feels muddled in delivery. The idea of the gang taking a vacation manages to provide a nice cadence for all of the antics that follow.

The first film focused on Mavis and Johnny’s love, the second their family and third, well the third comes full circle to Drac on the prowl and Mavis looking out for her father. Consider the Bermuda shorts and mankinis a bonus.

A Modern Day Classic in Every Sense of the Term

When it comes to the current crop of computer animated feature films, some of the biggest surprises in the industry come from pretty unlikely sources. Nope, you won’t find the words Disney or Pixar anywhere on this one nor will you find DreamWorks famous kid fishing off the half-moon. You may discover that Sony Imageworks was involved in the production, Columbia Pictures handles the distribution oh and perhaps you’re familiar with the two executive producers: Steven Spielberg & Robert Zemeckis?

Rest assured, this is a title that actually manages to live up to the precedent these two gentleman established back in the 1980s with a whole class of films that captured the simple joys of youth, the sense of adventure within our own imaginations and the fear and terror of those things all kids worry about but don’t talk about at the school lunch table for fear of ridicule.

Monster House follows the exploits of early-teen DJ who finds himself smack dab in the ugly transitional phase from boy to man when the responsibilities of being adult blend annoyingly with the rules of being a kid.

DJ has developed a slight obsession with observing the goings-on across the street with old man Nebbercracker (who flips out when children trespass on his lawn) and the creaky old house in which he resides.

When DJ’s parents travel to a dental seminar on Halloween eve and leave DJ with a babysitter not much older than he is, he calls upon his clumsy best friend Chowder to begin investigating the phenomenon taking place a few feet away from his house. When the house nearly swallows the cute door-to-door candy salesgirl Jenny, the trio of paranormal investigators is born on the spot.

Adults don’t want to hear it, the police think the kids are being pranksters; the babysitter is more concerned with her boyfriend and with Halloween approaching rapidly and with it hordes of innocent trick-or-treaters, the mystery of the Monster House has to be solved before it can claim countless costumed victims just looking for some candy.

I knew this one was something special right in the first lines of dialog. The humor is spot-on! And rather than simple animate the whole film using figments of a team of animators’ imaginations, Monster House uses the motion capture method of animation made famous by films like the Polar Express and Robert Zemeckis’ version of the ancient legend Beowulf.

The technique works here and establishes a very atypical suburbia with just enough hints of fall in the air to add to the magical feel that time of year naturally inspires.

It’s the acting however that elevates this film to the top tier of the modern CG animation film. The young actors are just brilliant in their deliveries from beginning to end and couple this to a script that had a room full of adults laughing out loud nearly continually and you realize that this is no ordinary “kid’s movie”.

About my only complaint about this entire film is that, as many others have noted, this really isn’t ideal for younger viewers or even overly jumpy adults. A few moments are a bit intense although never is the film graphic, overly violent, nor does it contain a single cuss. It’s simply guilty of classic-filmmaking suspense whereby what you hear and don’t see on screen can be far more terrifying than even the most graphic costume, prop or computer-generated monster. 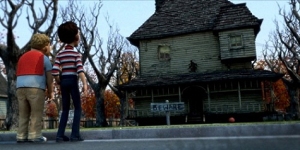 And like the previous examples on which Steven Spielberg’s empire has been built, the ending actually reveals what turns out to be a story of love and compassion at its core.

In all, I came away from Monster House absolutely enamored with the plot, pacing, flow, visuals, and perhaps most of all, genuine humor. Truly this film harkens back to a more innocent time of visual story telling and is an absolute delight to behold as a result.